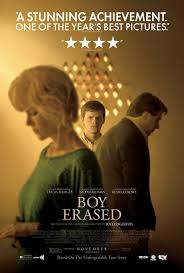 Boy Erased tells the story of Jared (Lucas Hedges), the son of a Baptist pastor in a small American town, outed to his parents (Nicole Kidman & Russell Crowe) at age 19. Jared is faced with an ultimatum: attend a conversion therapy program or be permanently exiled and shunned by his family, friends, and faith. It is the true story of one young man’s struggle to find himself while being forced to question every aspect of his identity. His parents struggle with reconciling their love for their son with their own beliefs. Sessions in the therapy program dominate the film, with flashbacks of Jared in college and his rare, gay acting-out episodes.
The film throws punches — including facts about characters as they are living now — and it is easy to experience the truths about conversion therapy. But not only is it a fine film, it is also an important one to learn about a process that still exists in some places. Boy Erased received numerous award nominations and wins, including a Golden Globe Best Actor nomination for Hedges.